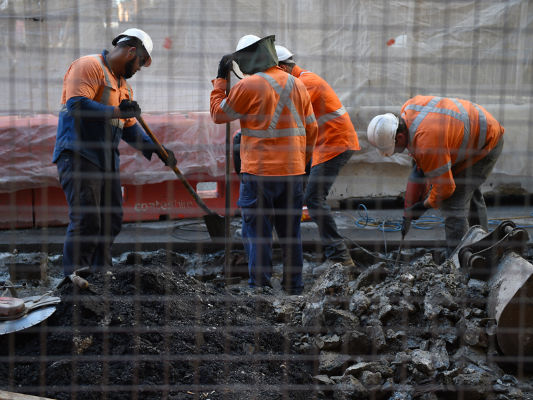 Australians seem to be content to put job security over pay rises, with wage growth at record lows and likely to remain sluggish.

The wage price index for total rates of pay excluding bonuses rose 0.5 per cent in the June quarter, the third straight increase of that size, according to seasonally adjusted figures from the Australian Bureau of Statistics.

The index rose just 2.1 per cent in the year, equalling the slowest rise since records began in 1997.

Both private and public sector wage prices have now levelled out, meaning there’s not much hope for a lift in wages this year, Royal Bank of Canada analyst Michael Turner said.

“There are reasons to think that downward pressure on wage inflation will remain,” he said.

“Firstly, the rate of labour force underutilisation remains high, which will continue to dampen any wage pressure. Secondly, headline inflation has fallen further, which creates a low starting point for a lot of wage claims and will also weigh on inflation expectations.”

Commonwealth Bank of Australia senior economist John Peters said workers’ pursuit of higher wages had been toned down ever since a rise in unemployment to 6.4 per cent – a 13 year high – in January 2015.

“A key reason behind this could be that the much more flexible labour market in recent years has enabled companies to cap/bear down on wages growth in a relatively lacklustre jobs market, with workers possessing little real negotiating clout,” he said in a note.

“In a period of jobs market torpor employees tend to cop it sweet and accept lower wages in return for heightened job security.”

UBS economists said the wage figures were unlikely to further dampen the Reserve Bank’s forecasts for consumer prices, which are already well below its two to three per cent target band, so another interest rate cut was unlikely.