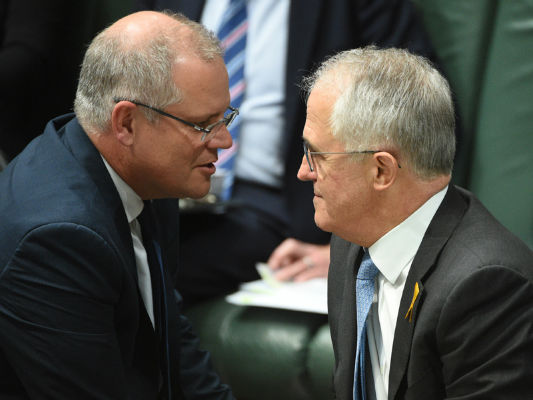 A handshake between Treasurer Scott Morrison and his Labor counterpart Chris Bowen on the floor of parliament has sealed the deal for $6.3 billion in budget savings.

It was a rare moment of public civility between the rivals, but marked the 45th parliament’s first attempts to repair the budget.

Prime Minister Malcolm Turnbull said the passing of the so-called omnibus bill – a package of 20 measures ranging from cutting family benefits to climate change funding – through the lower houses was a very important step.

“It shows that the parliament can work and we need it to work more and more effectively in the future,” he told MPs.

However, crossbench MPs were far from happy with the result, especially the cuts to renewable energy funding.

Greens MP Adam Bandt thought it a “dirty deal”, while independent MP Andrew Wilkie called it “blackhearted” and accused Labor of being a “pack of quislings” for supporting it.

Even Mr Morrison couldn’t help having a dig at Labor for its “lap of honour” as one after another of Labor’s frontbench stood up boasting of their efforts to secure what they saw as a fairer deal.

“The government is getting on with governing and the agreement reached on this bill demonstrates the ability of the government to get things done in this parliament,” Mr Morrison told parliament.

The treasurer wants his bill passed by the Senate this week.

“Today we lead the way as well,” he told MPs.

The amendments to the original bill allow the energy supplement to continue for eligible recipients, including those on Newstart and pensioners, dropping the baby bonus and abolishing a tax benefit supplement for families with incomes of more than $80,000.

Cassandra Goldie, head of welfare group ACOSS, said while the retention of the energy supplement for those receiving social security payments was welcome, the threat of further cuts remained.

It was unfortunate the debate was whether or not to cut the $38-per-day Newstart allowance by removing the energy supplement.

“We should be focusing on how to increase the payment so people can live with dignity while looking for work,” she said.

The bill’s urgent passage comes as the government has been served a fresh warning about the state of the budget.

The finance department has sounded the alarm in a briefing to its minister Mathias Cormann, casting renewed doubt over Australia’s path to surplus in 2020/21.

“The 2016 Pre-Election Economic and Fiscal Outlook reports a significant fiscal challenge for the government,” the document, released to the ABC under Freedom of Information laws, said.