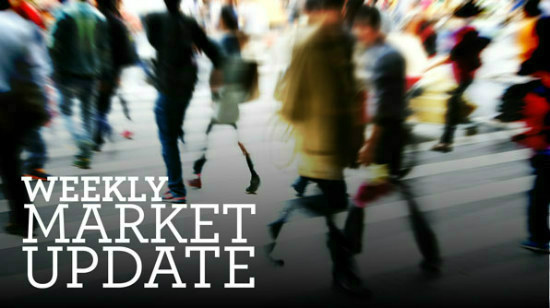 The past week was mixed for share markets. While Australian shares rose 1.2% and eurozone shares rose 1%, US shares fell 0.1% as oil prices declined, Japanese shares lost 0.4% not helped by an underwhelming easing by the Bank of Japan and Chinese shares fell 0.7% on the back of the banking regulator increasing measures to reduce financial risks. Bond yields also fell, but commodities were mixed with oil down and iron ore up. The US dollar declined which saw the Australian dollar rise.

More broadly, July was a good month for shares, with strong gains in global shares – US shares +3.6%, eurozone shares +5.1%, Japanese shares +6.4% and Chinese shares +1.6% and the Australian share market up around 6.3%, its best month since October 2011. Key drivers included good global economic data, good profit news out of the US, talk of easier for longer monetary policy and, in Australia’s case, a further rise in the iron ore price. As can be seen in the chart below, economic data has been coming in better than expected lately with economic surprise indices (which measure data releases against market expectations) looking better.

As expected the US Federal Reserve (Fed) is more upbeat on the US economy, seeing the near term risks as having diminished but still seeing only gradual interest rate increases ahead. The basic message is that the Fed is not going to do anything to knowingly put the global and US economies at risk given the fragile nature of growth and the fact that inflation remains low. Weaker than expected US June quarter gross domestic product (GDP) growth of just 1.2% annualised and soft June quarter employment cost growth of 2.3% year-on-year will further delay the Fed but another hike is still likely by year end.

After much anticipation Japan has announced more monetary and fiscal stimulus. However, the Bank of Japan has underwhelmed with just a doubling of its of exchange-traded fund (ETF) buying program (to ¥6 trillion per annum) but no increase in its bond buying program or monetary base target and no further cut in interest rates suggesting no real further easing of monetary policy. However, it’s not all negative as the ETF buying is positive for shares, the absence of more negative interest rates is positive for banks and the Bank of Japan will review policy more broadly at its next meeting. The focus now shifts to fiscal stimulus with Prime Minister Shinzo Abe announcing plans for a ¥28 trillion economic stimulus. While this is a big number (6% of GDP) much uncertainty remains around how much is real new stimulus and how many years it will be spread over. It’s doubtful that any of this will be enough to break the stop/start recession pattern and achieve the 2% inflation target, so ultimately some form of helicopter money will be required, but we are not there yet. In the mean-time there is a risk of further yen strength.

The results of the latest European large bank stress tests were better than expected with only Italy’s Monte Paschi and Allied Irish “failing” the tests in that their capital ratio would fall below 4.5% under stress. Allied Irish only failed marginally but Monte Paschi would see its capital wiped out. The problems at Monte Paschi are no surprise though.

What’s wrong with Italian banks? Put simply, after years of poor growth and low interest rates Italy’s banks have seen their non-performing loans rise to the point that one of them – Monte Paschi – needs to be recapitalised or else it will have to slow lending, which will be bad for Italian growth. The trouble is that bank share prices have collapsed making it hard to raise capital from the equity market and European rules on bank recapitalisation require private bond holders in banks to take losses ahead of the injection of public money. After the political furore that followed when an elderly retail investor committed suicide last November after having to take a €100,000 loss on a bond holding in a small bank, the Italian Government cannot afford to have a wider “bail-in” of ordinary bank investors as it will damage its prospects of winning a referendum on reducing the Italian Senate’s power, which in turn could lead to the fall of the Renzi Government. So there is a stand-off between Prime Minister Matteo Renzi and the European Commission, but ultimately a compromise is likely as the rest of Europe realises that failure to do so could see the Eurosceptic Five Star Movement attain power in Italy. The European Banking Authority’s bank stress tests could help clear the way for such a compromise.

While June quarter inflation in Australia was in line with expectations including those of the Reserve Bank of Australia (RBA) it showed that inflation has fallen further below target and that underlying inflationary pressures are very weak. Ongoing signs of very weak pricing power are evident in a range of areas including for supermarket items, clothing, rents, household equipment, car prices, communication and recreation. The basic message is the global deflationary forces, high levels of competition and weak wages growth are keeping inflation ultra-low with the risk inflationary expectations will be pushed down and make it harder to get inflation back to target. As such, pressure on the RBA remains intense.

US data was a bit mixed over the last week with stronger than expected consumer confidence and new home sales and continuing low jobless claims, but soft durable goods orders, pending home sales, GDP growth and employment cost growth. June quarter GDP growth disappointed at just 1.2% annualised after just 0.8% in the March quarter. However, final demand growth was solid at 2.4% and the detraction from inventories (which was -1.2 percentage points) is likely to have largely run its course.

Evidence is continuing to build that US profits have bottomed. To date 316 S&P 500 companies have now reported June quarter earnings and the results show an 8% plus pick-up in profits on the March quarter with 81% beating on earnings and 58% beating on sales.

While confidence readings in the UK continue to come in very weak post Brexit, they are holding up reasonably well in the eurozone with economic confidence actually rising slightly in July. Eurozone bank lending growth also picked up a notch in June pointing to continued moderate growth. June quarter GDP growth slowed to 0.3% quarter-on-quarter or 1.6% year-on-year from 1.7% year-on-year and July core inflation was unchanged at 0.9% year-on-year.

Although Japanese jobs data in June remained solid and industrial production rose, household spending remains very weak, deflation remains evident in a fall in the consumer price index of -0.4% year-on-year and core inflation fell further to just 0.4% year-on-year. What’s more, the jobs data is being flattered by a falling workforce and while industrial production bounced it followed a weak May and is down -1.9% year-on-year. All of which explains the need for more aggressive stimulus in Japan.

In the US, jobs data (Friday) is likely to remain consistent with solid US economic growth. Expect a 180,000 gain in payroll employment, unemployment remaining around 4.9% and a slight edging up in wages growth. Meanwhile the manufacturing conditions ISM index (Monday) is likely to remain around 53, the core private consumption deflator (Tuesday) is expected to hang around 2.6% year-on-year and the non-manufacturing conditions ISM (Wednesday) is expected to remain solid. June quarter corporate earnings will also remain a focus.

The true stimulus flowing from Japan’s ¥28 trillion plus stimulus package will be assessed when details are released Tuesday.

The Bank of England (Thursday) is likely to ease policy, responding to the post Brexit confidence slump.

Chinese manufacturing conditions purchasing managers’ indices (Monday) are expected to show a modest improvement, but nothing to excite.

In Australia, we expect the RBA (Tuesday) to cut the cash rate again by another 0.25% taking it to a new record low of 1.5%. The June quarter inflation data is not low enough to make an RBA rate cut certain particularly given that recent economic data has been reasonably good. However, on balance we expect that the RBA will cut again to help ensure that inflation expectations do not become entrenched below 2%, so that there is reasonable confidence that inflation will move back into the target zone in a reasonable time frame and to head off a rebound in the Australian dollar. Alternatively, if the RBA does not cut again on Tuesday, then expect an easing in November. The RBA’s Statement on Monetary Policy (Friday) will likely make minimal changes to its growth and inflation forecasts.

On the data front in Australia, expect July CoreLogic data to show a further loss of momentum in Sydney and Melbourne home prices, a 1% bounce in June building approvals and a slight improvement in the June trade deficit (all Tuesday) and a 0.3% gain in retail sales (Thursday).

The Australian June half profit reporting season will also start to get underway in the week ahead with a handful of companies due to report (including Rio Tinto, Tabcorp and Suncorp). After the downgrades since the last reporting season back in February the hurdle to avoid disappointment is now relatively low. Consensus expectations for 2015-16 earnings are now for an 8% decline in profits driven by a 50% fall in resources earnings and a 2% fall in bank profits leaving profits in the rest of the market up just 1%. Key themes are likely to be: improved conditions for resources companies following a stabilisation in the iron ore and oil price; constrained revenue growth for industrials although improved business conditions according the National Australia Bank’s business survey may help; ongoing cost cutting; continuing headwinds for the banks; and an ongoing focus on dividends. Sectors likely to see good profit growth are discretionary retail, industrials, gaming and healthcare.

Ultra-low bond yields point to a soft medium-term return potential from them, but it’s hard to get too bearish in a world of fragile growth, spare capacity, low inflation and ongoing shocks. That said, the recent bond rally has taken yields to pathetic levels leaving them at risk of a snapback.

Commercial property and infrastructure are likely to continue benefitting from the ongoing search for yield by investors.

Dwelling price gains are expected to slow to around 3% over the year ahead, as the heat comes out of Sydney and Melbourne thanks to tougher lending standards and as apartment prices get hit by oversupply in some areas.