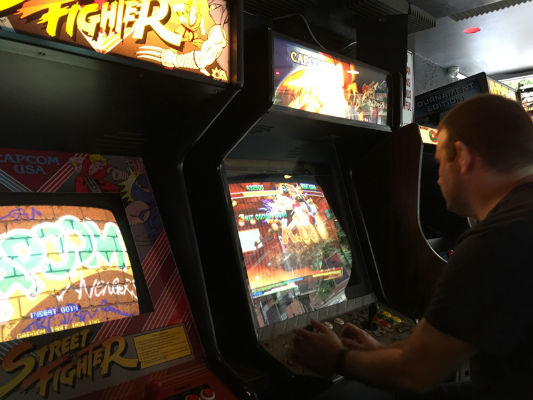 His fist hits my face, and I fall backwards as if in slow motion.

The crowd shouts, “Finish him!” He complies, reaching into my chest and tearing out my still-beating heart. A cheer goes up in the bar, and I fish around in my pocket for a token to continue.

Arcade bars, intoxicating cocktails of craft beers and video games, were initially a Brooklyn experiment but are now popping up in Manhattan, New Jersey and Philadelphia – with other cities following suit.

Even Sydney’s getting into the game. Coogee Diggers offers pinball tournaments every Wednesday night, while Newtown’s 1989 Cafe has recently started serving up coffee and old-school arcade action.

In Manhattan Manny takes a sip of his beer as he blows away a legion of terminators in 2029.

“I think the drinking actually helps my aim,” he says.

Bars and arcade games are a logical pairing – people play more when they drink, and drink more if they’re on a winning streak.

But I can’t help but think that filling a confined space with two addictive pursuits seems like a risky proposition.

For the Barcade franchise, it’s paying off big time.

“I wouldn’t call myself a regular,” Manny continues.

“I don’t want to sound like an alcoholic. But I’ve gotta beat this game.”

Video arcades died off in the late 1990s as home video game consoles grew more powerful, affordable and – some might say – socially acceptable.

That extinction left a gaping hole in the childhood of an entire generation, but now those kids are all grown up, and Barcades are filling the void with a vengeance.

If you’re keen to visit, bring your ID, cash and a good supply of childlike glee.

“Man, this game was my jam!” exclaims John, a young hedger, as he spies the Teenage Mutant Ninja Turtles cabinet straight outta 1989.

Most of the games are old, and it takes a lot of work to maintain them.

That means bartenders have to have a bit of tech knowledge – as well as being able to pour a mean pear cider.

“I can open the cabinets, but that’s about it,” says Mindy as she hands me my Smuttynose Coily (that’s a beer, not a game). “They’re pretty sturdy. Most of them are older than me.”

You’re unlikely to be here if you’re not into games – but if that’s the case, the bar’s selection of craft beer and surprisingly decent food will keep you full of credits.

You’ll just have to endure the sonic maelstrom from the games unlike any DJ set possible.

The Manhattan Barcade is an eclectic mix of clientele: young hipsters gunning for Donkey Kong against 90s-era Mortal Kombatants; old dudes saving the world from space invaders; and a bunch of newbies who look around awestruck in the dim glow of two dozen CRT screens.

Despite the competitive nature of the games, there’s no aggression here. You can just take it out in-game, with arguments settled in virtual street fights. It’s the ultimate spectator sport.

I myself choose to go back on the offensive – my tokens have bought me a second lease on life and I’m thirsty to win.

In a breathless 60 seconds, I beat the stuffing out of my opponent and again, the crowd chants, “Finish him!” It’s time.

I grab his head, tear it off, spine and all, and present it to my rapturous audience. He laughs and buys me another beer.

Barcade is a chain of bars across the northeastern US. The bars feature classic arcade games and draft beer from local and regional American microbreweries. For more info visit barcade.com

New York City is serviced by Qantas, United, Delta and Virgin Australia airlines, usually with a stop in Los Angeles.

Each Barcade is a stone’s throw from accommodation. Visit www.nycgo.com for hotels, or if you want more to spend on the games, visit www.airbnb.com for more affordable options.

Barcade has New York-centric locations including Brooklyn, Jersey City, New York and St Mark’s, with the games selection varying in each. The New York location skews slightly older, while St Mark’s provides the greatest of the 90s. For detailed lists visit barcade.com

* The writer travelled at his own expense.